MolliePup here again. Every time my human Jr goes to work, Mumma goes to his room and watches the show about women in prison called Orange Is The New Black on his xbox gamey thingy. He goes away for like, eight minutes or eight days or something, I can't really tell time all that well, but she watches like, a bazillion episodes in a row.

This means, of course, that I have to cuddle close to her in a bed that isn't mine. Jr bedroom is like the Holy Grail of bedrooms. I'm not usually allowed in it. He keeps his door closed and doesn't like a lot of visitors. Jr bed is like the Holy Grail of beds. If I'm invited in Jr bedroom like five times, I'm only invited onto Jr bed like one of those times because he wants to pet me. I always approach like its scary, because it totally is. There's too much pressure. What if I do something wrong and I'm not invited on it anymore?  I might have a guilt complex.

But when Mumma spends eight seconds in there watching the Netflix, I get to spend all eight of those hours or whatever on Jr bed. It's glorious. 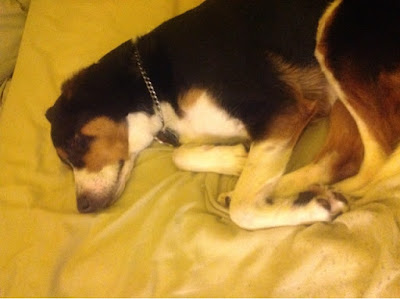 Sometimes treats don't always come from a box with a picture of treats on it. Sometimes a treat is just lying in Jr bed and spending time with Mumma like I did today.