Some time ago, I came across something called the Nine Grid Plan. I don’t know where I saw it or who created it (If you know, please tell me so I can give them credit!), but it’s been the most helpful thing for my writing.

I’m not a plotter, not by a long shot, but I do like to have some sort of outline to work from. I like to know some of the major plot points and where I’m going before I set out to do some writing. I’ve tried doing an outline, but things shifted around so much that I was revising my outline after every chapter. I wasn’t sure which plot point went where, or how each plot point related to one another in the grand scheme of things.

The Nine Grid Plan is nine boxes, duh, set up with the nine major plots, like so:


1. Triggering Event
First things first. What happens? Why have you bothered to write a book, and more importantly, why should a reader invest time flipping through its pages? Your triggering event is the answer to these questions, so make it a good one. Also, don't make the reader wait very long for it. First page, first paragraph, first sentence. These are good spots for a triggering event.

2. Characterization
Generally, books succeed or fail on the strength of their characters, more so than on the strength of their plots. Box 2 is where you explore what makes your protagonist tick. No, this isn't an excuse for drawn out exposition, history, or back story. If your triggering event is captivating, the reader will discover enough about the protagonist in Box 2 simply by reading how he or she reacts to the event.

3. First Major Turning Point
By now, your plot is picking up steam, and because of Box 2, the reader is invested in the ride. Time to throw a curve ball. This turning point can be either a positive event for your protagonist, or a negative one, but it should lay the groundwork for the negative turning point in Box 6. There is a reason these boxes are touching one another; they interrelate. For example, Box 3 may introduce the motivation of the antagonist, which then justifies the events in Box 6.

4. Exposition
You've earned some time to fill the reader in on important data. Since this box touches Box 1, here's where you shed some light on that triggering event. Since it also touches Box 7, you get to foreshadow your pro-tagonist's darkest hour. Box 4 often reveals a relationship, character flaw, or personal history that contributes to the dark times ahead.


5. Connect the Dots
Here is where many plots fall apart. Box 5 must connect to all the boxes around it. (2, 4, 6, &amp; 8.) Box 5 should tick systematically upon elements introduced in Boxes 2 and 4. And like the calm before the storm, Box 5 should give the false impression of resolution before heading like a freight train to Box 6. Most importantly, it needs to provide foreshadowing for the protagonist's revelation in Box 8.

6. Negative Turning Point
Here's where that bomb explodes and all (word censored) breaks loose. Good thing you laid the groundwork in Box 3. Good thing, too, that Box 9 will deliver some just desserts.

7. Antagonist Wins
The protagonist is defeated here, and the antagonist apparently wins. How the protagonist deals with the darkest hour of defeat depends upon the traits and/or story developed in Box 4, which leads to his or her revelation in the next square.

8. Revelation
Of course! The protagonist's revelation turns the tide. Here is where the protagonist connects the dots and overcomes the obstacles of Boxes 6 and 7 via the device introduced in Box 5.

9. Protagonist Wins
The negative turning point in Box 6 is rectified while the character's resolve from Box 8 is brought into full bloom. Congratulations! Another great tale told greatly. 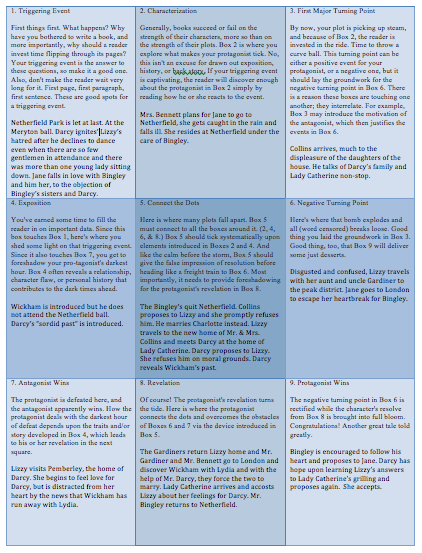 You can download a color-coded copy of the nine grid plan all laid out here. I've set it up with Austen's Pride &amp; Prejudice as a sample.

You can see how box 1 relates to boxes 2 and 4; Netherfield is let in 1, Jane convalesces at Netherfield in two, and the Netherfield ball is held in 4.

Likewise, the three middle columns all feature Jane and Bingley's relationship. In 2, Jane's stay at Netherfield causes Bingley to fall in love with her. In 5, Bingley quits Netherfield and by extension, Jane. In 8 however, Bingley returns to Netherfield and to Jane. 8 connects to 9 when Bingley proposes to Jane.

4 relates to 7 in that Wickham slanders Darcy in 4 and Wickhams own role in the plot with Darcy's sister is revealed in 7.

The columns all relate, but so do the rows.

Sure it's not 100% matchy-matchy with all the boxes lining up, but I put that together in twenty minutes during a word war. If it fits Austen's plot, one of histories' most perfect authors, imagine what it can do for your stories!

Isn’t the Nine Grid Plan genius? From the start, you’re able to nail down those big moments and plan for things to happen. You know how they relate to each other and you can be sure that you’re telling the whole story. My first four novels were “done” when I finished my cruddy outlines, but I ended up going sometimes another 10k to get the story written. It was frustrating that I’d then have to go back and cut words out to stay within standard word count limits.

With the Nine Grid Plan, when you get to box five, you will be in the middle of your MS and there will be no finishing the story after you’ve written all of your boxes out.

The Nine Grid Plan is also great for writing your synopsis, as you have the nine major plot points right there. Add in a few characterizations and flourishes, and there’s your one page synopsis all ready to go.

Have you ever used the Nine Grid Plan? If not, go ahead and try it out and let me know how you get on!